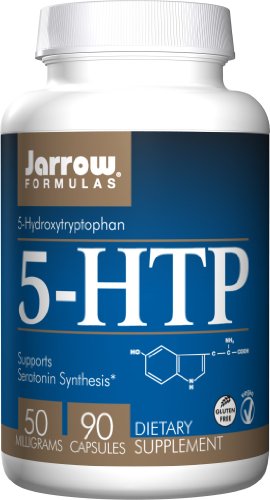 Average Customer Rating:
4.7 (Based on 15 reviews)

Product Description
View larger Product Profile 5-Hydroxytryptophan (5-HTP) is an amino acid naturally produced by the body from the essential amino acid L-tryptophan. 5-HTP is the immediate precursor to serotonin (5-hydroxytryptamine, 5-HT) and also a precursor to melatonin. In the brain, serotonin and melatonin help regulate sleep, mood, temperature, and appetite. As such, 5-HTP and L-tryptophan are often taken as supplements to support these roles.* Yet even though L-tryptophan can be transformed into 5-HTP in the body, the two should not be considered interchangeable for supplement use. The conversion of tryptophan to 5-HTP is the rate-limiting step in neurotransmitter production and, in addition, L-tryptophan is utilized for a variety of other purposes in the body leading to less serotonin support than may be assumed. In purified form, humans have been consuming 5-HTP for over forty years. Distinguishing Features: Sourced botanically from Griffonia simplicifoliaSerotonin & melatonin precursor View larger 5-HTP vs. L-Tryptophan The body uses L-tryptophan for other metabolic purposes besides serotonin and melatonin production. For example, L-tryptophan is incorporated into proteins and also acts as a precursor in niacin biosynthesis. L-tryptophan absorption in the intestines requires a shared amino acid transporter, meaning that competition with other amino acids from dietary sources can lead to poor L-tryptophan absorption. A similar specific, active transport mechanism is required for L-tryptophan entry into the brain. A number of other physiological and biochemical parameters, such as stress, insulin response, and vitamin B6 levels can conspire to prevent L-tryptophan from becoming serotonin. In contrast, 5-HTP is not incorporated into proteins and cannot be used to produce niacin. 5-HTP does not require an intestinal transporter for absorption and is absorbed well even in the presence of other amino acids from food, with about 70 percent of that ingested ending up in the bloodstream. Also, since 5-HTP participates in fewer biosynthetic pathways it is inherently less susceptible to metabolic diversion. The only hindrance of importance for ingested 5-HTP is the activity of peripheral decarboxylase enzymes, which can convert 5-HTP to serotonin before crossing the blood-brain barrier. However, the results observed in 5-HTP research demonstrate that this is not a major concern. View larger Serotonin & The Second Brain Some now use the phrase “our second brain” to refer to the impact our digestive tract can have on the entirety of the body. An example of this is the gut-brain axis, which involves extensive bidirectional signaling and feedback between gut and brain. For anyone who has attempted to diet in the past, this may already be understood experientially. Serotonin plays a significant, yet not completely understood role in the human digestive tract and gut-brain axis. In fact, research demonstrates 5-HTP may even affect leptin, which helps to regulate energy intake and appetite.* Such a connection may help explain results in overweight individuals who were able to exert much better control over their diets when taking 5-HTP. *These statements have not been evaluated by the Food and Drug Administration. This product is not intended to diagnose, treat, cure, or prevent any disease.
Learn what other customers say about this product Read more

Thanks to the seller for offering Jarrow Formulas 5-HTP 50mg, Brain and Memory Support, 90 Caps on sale

thanks to the seller for free shipping! happy with the purchase

That’s the only wtore where i found a new Jarrow Formulas 5-HTP 50mg, Brain and Memory Support, 90 Caps

Such a low priced Jarrow Formulas 5-HTP 50mg, Brain and Memory Support, 90 Caps is truly a bargain. Thanks to the seller!

a nice one. will come in handy

Just the best. Savings for Jarrow Formulas 5-HTP 50mg, Brain and Memory Support, 90 Caps are 100% worth it. The seller is awesome

never thought i will ever buy Jarrow Formulas 5-HTP 50mg, Brain and Memory Support, 90 Caps online. but here i am, satisfied and pleased. thanks for awesome experience!

i really liked it, it’s better than i hoped

significantly better than a similar one i bought offline

After a long search I can safely say it’s the best price for Jarrow Formulas 5-HTP 50mg, Brain and Memory Support, 90 Caps out of all the other options.

for such a resonably priced item its quality is astonishing. i guess i’ll be back for more

Write a customer review:
Thank you for your comment. Our moderators will revise it within 7 days.
Stay Connected:
Brain Energy Supplement Participant in the Amazon Services LLC Associates Program, an affiliate advertising program designed to provide a means for sites to earn advertising fees by advertising and linking to Amazon.com, Endless.com, MYHABIT.com, SmallParts.com, or AmazonWireless.com. Amazon, the Amazon logo, AmazonSupply, and the AmazonSupply logo are trademarks of Amazon.com, Inc. or its affiliates.
Brain Energy Supplement © 2020
This website uses cookies. By using and further navigating this website you accept our privacy policy and terms and conditions . Detailed information about the use of cookies on this website is available by clicking on cookie settings .
Accept
Privacy settings ×
×