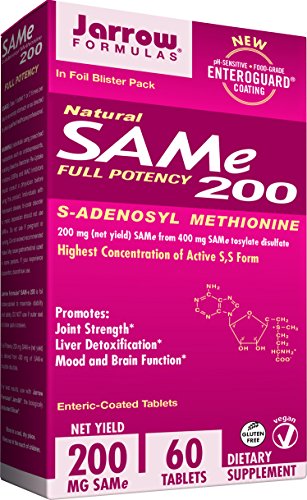 Average Customer Rating:
4.7 (Based on 21 reviews)

Product Description
Jarrow Formulas SAM-e 200, 200mg, 60 TabletsAt a Glance:Contributes to the proper functioning of many biochemical systemsIdeal for those wanting to optimize cognitive function, mood, energy levels, liver activity and joint health*Preserved bioavailability through low-temp and low-moisture manufacturingProcessed without solventsProtected from degradation via enteric coating and blister-packaging SAM-e contributes to the proper functioning of many biochemical systems. S-adenosyl-L-methionine (SAM-e) is an amino acid derivative clinically documented to benefit brain, liver and joint function*. View larger.The Multi-Functional Supernutrient S-adenosyl-L-methionine (SAM-e) is an amino acid derivative clinically documented to benefit brain, liver and joint function.* Found in all living cells, SAM-e is called "activated methionine" and is formed via combination of ATP with methionine. Somewhat counterintuitively, however, methionine supplementation does not elevate SAM-e levels in the body. Rather, it elevates problematic homocysteine. SAM-e has undergone many clinical trials involving thousands of human subjects. Researchers have identified many structure- and function-based benefits of SAM-e involving over 40 biochemical processes. It is a biochemical workhorse with various diverse effects on the body, including improving liver function, supporting joint health and lifting mood.*Liver Detoxification SAM-e metabolism supports glutathione (GSH) synthesis and glutathione-dependent enzymes, which support liver function.* GSH, the chief antioxidant and detoxifier inside cells, scavenges free radicals produced during carbohydrate breakdown for energy. Taurine is another end product of SAM-e metabolism. GSH and taurine are important for liver detoxification.*Brain Function SAM-e supports brain function by its methylation effects.* Methylation is the transfer of a methyl group (one carbon and three hydrogen atoms, CH3) from one molecule to another. SAM-e is the most important of all methyl-donors in mammalian metabolism. Donation of methyl groups supports numerous metabolic processes including brain function, energy production and DNA metabolism. Neurotransmitters, substances involved in nerve cell communication, are also products of methylation. These compounds include L-DOPA, dopamine, serotonin, epinephrine and phosphatidylcholine (in lecithin). SAM-e is thought to benefit cognitive health by supporting the production of such critical brain messengers.* In fact, many people report noticeable positive effects on brain and mood after only taking it for a short time.*Energy Production Methylation from SAM-e is also critical for creatine production. Creatine metabolites are important for ADP to ATP recycling and storing energy for immediate needs. Supporting creatine levels may help maximize physical performance, reduce exercise fatigue and improve recovery after exercise.*Longevity A healthy young body manufactures all the SAM-e it needs. However, with age, people are less able to produce adequate SAM-e. This may contribute to declining health on many levels. Fortunately, these disturbances are often boosted by SAM-e supplementation.* In addition, methylation of DNA is an important part of DNA repair. De-methylation of DNA contributes to the aging process. Proper methylation, via substances such as SAM-e, positively influences longevity.*Healthy Connective Tissue Research has shown that regular SAM-e supplementation helps support joint health, and is used regularly in Europe to promote joint mobility and comfort.*Not All SAM-e is Created Equal SAM-e exists in two forms: (S,S) SAM-e and (R,S) SAM-e. The biologically active form is the (S,S) structure, while the (R,S) structure is inactive. Jarrow Formulas SAM-e is predominantly the active form. It is made naturally by microbiological fermentation and then specially processed, without solvents, to preserve 68-80 percent (S,S) SAM-e, the highest active level available. SAM-e is a highly reactive molecule and very fragile. It degrades rapidly under high heat or humidity. Improper handling of SAM-e can cause degradation in a matter of hours. Thus, the manufacturing process for Jarrow Formulas SAM-e is done under low temperature and low humidity, and the tablet is enteric coated and blister-packed. Pharmacokinetic studies show that oral supplementation of SAM-e is most effective when enteric-coated by special gastric fluid-resistant polymers, resulting in maximum blood levels.*Note: Side effects are rare and appear to be limited to gastrointestinal disturbances. This product complies with the proposed USP Monograph for SAM-e.Warning: Individuals using prescribed medications such as antidepressants, including Selective Serotonin Re-Uptake Inhibitors (SSRIs) and MAO Inhibitors should consult a physician before using. Individuals with Parkinson's disease, bi-polar disorder or manic depression should not use SAM-e.About Jarrow Formulas Jarrow Formulas' complete line of over 350 nutritional products includes vitamins, minerals, probiotics, standardized herbal concentrates, amino acids, enzymes and enteral nutrition products. Customers can be assured of purity, value and potency when choosing these products.What's in the Box Jarrow Formulas SAM-e 200, 200mg, 60 Tablets.Other Products from Jarrow Formulas:
Learn what other customers say about this product Read more

if you are looking for a real bargain, this is just what you need. superior quality, top service

perfectly made, no reason to worry

i really liked it, it’s better than i hoped

I think it is a good price for Jarrow Formulas SAM-e, Promotes Joint Strength, Mood and Brain Function, 200 mg, 60 Enteric-Coated tabs. happy with the service!

such a low priced Jarrow Formulas SAM-e, Promotes Joint Strength, Mood and Brain Function, 200 mg, 60 Enteric-Coated tabs is nothing but a bargain. got my mail in a really short time, no troubles

i guess this is the cheapest price for Jarrow Formulas SAM-e, Promotes Joint Strength, Mood and Brain Function, 200 mg, 60 Enteric-Coated tabs, so no wonder it’s such a hot deal. nice purchase, no comments

quality as expected. i surely reccommend

For my budget Jarrow Formulas SAM-e, Promotes Joint Strength, Mood and Brain Function, 200 mg, 60 Enteric-Coated tabs is a great buy. thanks to the seller!

I bought this three weeks ago and at first I loved it, but after a couple of employing) it I {{felt sorry for the money spent. For the value I gave for this Jarrow Formulas SAM-e, Promotes Joint Strength, Mood and Brain Function, 200 mg, 60 Enteric-Coated tabs I can mark the same quality I can get in any shop round the corner. This is unreasonable. Just not what I imagined it would be and very wrongly made compared to analogous production. Not that the quality is so terrible, but the product is not worth itsvalue.

Exactly what I expected!

Such a low priced Jarrow Formulas SAM-e, Promotes Joint Strength, Mood and Brain Function, 200 mg, 60 Enteric-Coated tabs is truly a bargain. Thanks to the seller!

Write a customer review:
Thank you for your comment. Our moderators will revise it within 7 days.
Stay Connected:
Brain Energy Supplement Participant in the Amazon Services LLC Associates Program, an affiliate advertising program designed to provide a means for sites to earn advertising fees by advertising and linking to Amazon.com, Endless.com, MYHABIT.com, SmallParts.com, or AmazonWireless.com. Amazon, the Amazon logo, AmazonSupply, and the AmazonSupply logo are trademarks of Amazon.com, Inc. or its affiliates.
Brain Energy Supplement © 2020
This website uses cookies. By using and further navigating this website you accept our privacy policy and terms and conditions . Detailed information about the use of cookies on this website is available by clicking on cookie settings .
Accept
Privacy settings ×
×